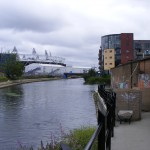 The main view from the Hackney Wick entrance 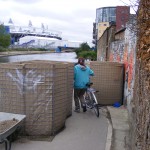 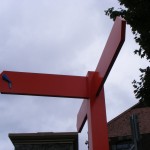 Signposts are blank as in the war 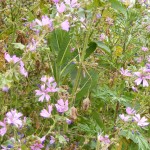 A new bridge at Fish Island A cleaned up Old Ford Lock 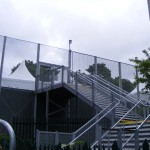 Bow Back Rivers under old route with defence provision

The towpath alongside the Olympic Park closed on Monday evening 2 July.

The Lea Valley Walk now ‘ends’ at the site of the Matchbox Toy factory below Homerton and will not continue south until after the Olympics.

The diversion from Marshgate Bridge to Bow Bridge is so long that it is hardly worth bothering with.

I walked down the towpath during the last daylight hours. It was a grey afternoon but still interesting.

The road surface on the Hackney Wick Bridge has been renewed. There is anew bridge downstream of Hackney Wick.

The greatest surprise is to find staff on duty at the Old Ford lock keeper’s office and the water clean.

But the towpath between Old Ford and Bow Flyover is much as it has been in recent times with plenty of blackberry blossom and green fruit.

Ripe blackberries should be ready for the path’s opening in the autumn.