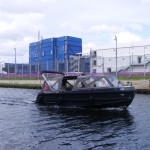 View from the Counter Cafe 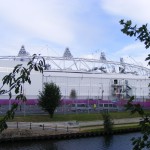 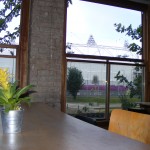 View from inside Counter Cafe 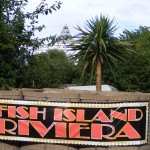 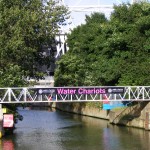 Bow Back River entrance leading to Arena from Swan Wharf 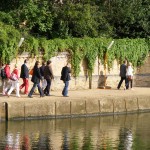 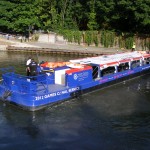 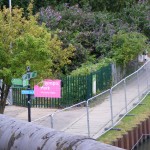 The entrance to The Greenway from the towpath 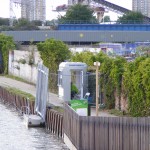 I had to visit the Olympic Park western boundary during the first week of London 2012.

It was possible to get a seat on the DLR to Bow Church Station. I was sorry to find the ancient Bow Church closed which seems a lost opportunity. But I was delighted to be able to enter Our Lady & St Catherine of Siena Roman Catholic Church which is open 9am to midnight and enjoying a steady flow of visitors. There is a history display at the back and handy free toilets.

Also open longer hours is the riverside Counter Cafe on Fish Island. There is plenty of room on the terrace or upstairs (where there is live Olympic television coverage) during the day. It’s more crowded with Olympic volunteers in the evening enjoying the home-made food.

Swan Wharf by Old Ford Lock is occupied by The Fringe. Here there is now free admission and you can enjoy and drink and a burger whilst watching water chariots tying up at the ‘bus stop’ opposite. There is a big screen. Swan Wharf has previously been used for storing pianos (made on the island), spices and peanuts.

The top of the Olympic Arena can be seen from the island but the view will be much better when the sponsor pavilions within the official zone come down. So the Counter Cafe has a good future and will again be a handy stop for walkers wanting to relax with a good view.

Grampian Police were patrolling the island on Saturday.

The Greenway can be accessed from Fish Island as far as the bridge over the Lea.

The best way to visit Fish Island this summer is from the south via Bow’s Fairfield Road or from the north starting at Hackney Wick Station. From the station go to the bridge over the Lea to take not the Lea towpath but the opposite path leading into the Hertford Union Canal. Here a footbridge links to Fish Island.